My brain won’t write today, so I made memes. I’m thinking of doing more of these pairing social justice issues with prophetic words of scripture, so if you have suggestions put them in the comments and I’ll see what I can come up with. 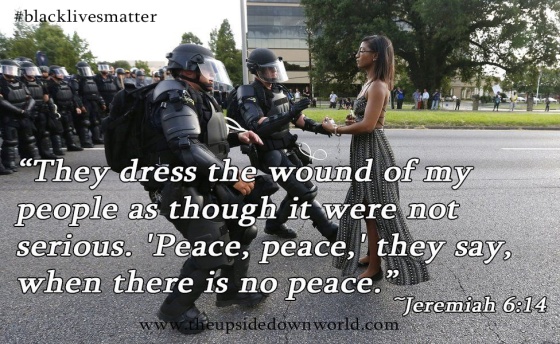 Want to see me turn into a psycho raving wiotch? Say something like this to me: “if the book of Genesis – particularly the creation – isn’t a historical record of what actually happened, then the bible isn’t trust worthy and our faith is meaningless.” Seriously – I made myself stop engaging in online discussions about creation because I am incapable of behaving like a decent human being, much less like a good Christian, when confronted with crap like that. In fact, just recently I broke my rule and ended up telling someone that the “god” he served – who is so weak and pathetic that he can be toppled by some labcoats and DNA – was a worthless piece of filth that wasn’t worthy of being squashed under the feet of the mighty God of the universe that I know. Which while true, may not have been the best demonstration of Christian tolerance and charity that I’ve ever displayed. So now you know why I normally don’t allow myself to partake of such discussions.

But for a lot of people who were taught some version of what is called inerrancy in certain Christian circles, the question does remain – how should we be reading and understanding the bible if not as the factually accurate Word of God, completely free from error or inconsistency? In the last few days, I’ve read a few other people’s explanations for how they deal with the hard parts of scripture or the parts which are in conflict with one another. Mostly the answers seemed to be that if there was a passage which portrayed God in what we’d consider a bad light, they would balance that passage against other passages which contradicted and decide that those took precedence over the negative passage. Or sometimes they would simply view a passage or story as an anachronism – a reflection of the cultural assumptions of the people at the time which was basically put in for their own benefit and not ours. Honestly, the answers I’ve read seem a bit like confirmation of the accusation that people simply pick and choose which parts of scripture to accept as true. So, I thought I’d share my own particular way of dealing with scripture with y’all.

Thankfully, by the time I had been exposed to the idea of inerrancy, I had already read the bible a time or two so I knew enough to take it with a grain of salt. However, I truly hope that it is clear from my writing that I do, in fact, hold the bible in very high regard. It would be hard for me to put into words just how important the bible is to me and the actual love I have for it. Which given the fact that I’m a writer who is seldom at a loss for words is saying a great deal. And I don’t feel free to ignore or dismiss parts of scripture because I don’t like or agree with them. Instead, I actually have a pretty well developed approach for understanding scripture and dealing with the difficult parts which I will try to explain briefly below.

First, I understand that unlike Muslims with the Koran or even Mormons and the Book of Mormon, Christians and Jews have always understood that our scripture was not dictated directly by God. Rather, it has always been considered to be inspired by God and written by men. Which means that it reflects both the input of God and man. A lot of people make the mistake of thinking that the scripture is God’s story alone – that anything which is not completely consistent with the reality and truth of God is absent from it. However, the scripture is rather clearly not just the story of God, but also the story of man. END_OF_DOCUMENT_TOKEN_TO_BE_REPLACED

Allow me to take you back to the halcyon days of the early aughts. Wikipedia was new. Destiny’s Child was still together. The first Lord of the Rings movie was coming out. And I was re-reading the Old Testament. I think a lot of people have had the experience of re-reading something like the bible and realizing that you didn’t absorb any of it the first time through. This was exactly what was happening to me. As I read the bible again, I was a bit overwhelmed by a lot of the mucky stuff in it. The guy who sacrificed his daughter to fulfill a pledge. Lot offering his virgin daughters to a mob. Samson killing everyone and cutting off their foreskins. The cannibalism. The commands to kill men, women, children, babes-in-arms.

I think it was after reading the story of Jael who put a spike through the head of a man in her tent that I put the book down and asked God that timeless question: “WTF?” And I actually got an answer: “I work it all out.” I remember praying about it and when I was told that God works it all out, it carried with it a sense of totality. Everything gets worked out. Everything. And I was still thinking, “WTFudge?” I felt like a shark with a beach ball – I just couldn’t grab hold of the idea. It was too much.

Part of the problem was that at the time I was a pretty standard Evangelical. Which means that I was inordinately concerned with who is saved and who is going to hell. END_OF_DOCUMENT_TOKEN_TO_BE_REPLACED

So, a couple of days ago I laid out my argument as to why the idea that God demanded the blood sacrifice of his son for the forgiveness of sins is an error. (If you missed it, you should go read that post before continuing with this one: Did God Really Demand the Death of His Son for the Forgiveness of Sin?) Today I further elaborate my explanation/argument for a better understanding of what happened and why.

The writings of the New Testament draw a very clear line from the animal sacrifices used to atone for sins practiced by the Jews and the death of Jesus on the cross. For example, Ephesians 1:7 says that we have “redemption by his blood”. Revelation 7:11 says of the saints “they have washed their robes and made them white in the blood of the Lamb.” However, in a rather complicated passage from Hebrews explaining why the death of Jesus was more perfect and more complete than the sacrifices which were offered by the priests in the temple for the forgiveness of sins, Paul refers back to Psalm 40 which makes the reality of sacrifice clear: “Sacrifice and offering you do not want; but ears open to obedience you gave me. Holocausts and sin-offerings you do not require; so I said, ‘Here I am . . . To do your will is my delight.’” And at the risk of offending my Catholic friends who hold the doctrine of transubstantiation*, Jesus further distances the will of God from the desire for blood by declaring that the wine and bread of the Passover and communion meals were metaphorically his blood and body. Since none of the disciples commented on the strange, metallic taste of the drink he gave them or the sweet, porky taste of the bread, I think we can assume that the wine and bread remained wine and bread and the need for actual blood is done. Again, the need for the human ritual portion of the relationship between God and man was complete and the God-given portion now emerges cleaner and clearer than before. END_OF_DOCUMENT_TOKEN_TO_BE_REPLACED