I really hate that we’re even having this conversation because it’s so damn stupid, but no one is disrespecting the flag. That’s just a bald faced lie. Kneeling is not a gesture of disrespect. It’s a prayerful, reverent position. If Kapernick had said he was kneeling as an act of patriotic fervor, no one except the Jehovah’s witnesses and the Mennonites would have objected. But he’s kneeling to protest a pattern of violence by the state against citizens, particularly black citizens. 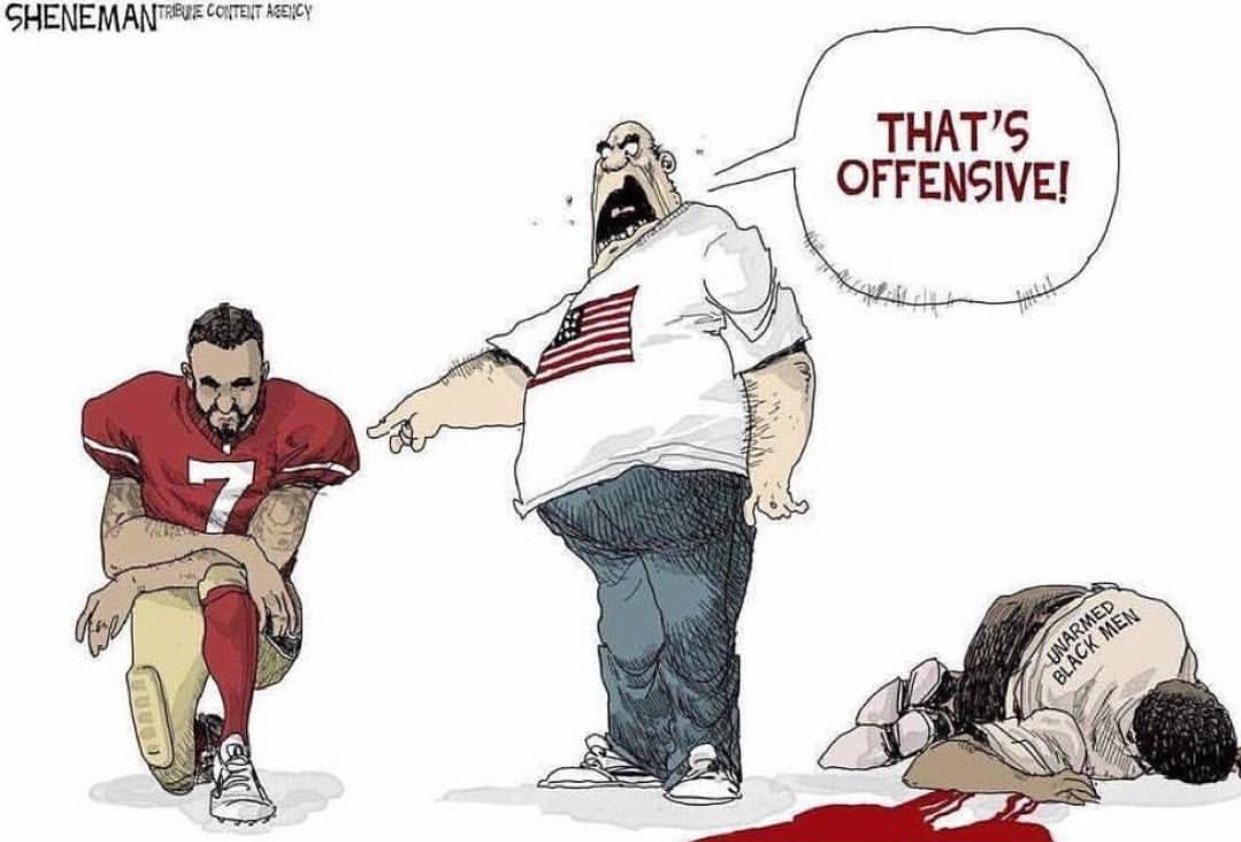 Let’s drill down to brass tacks about this issue. A 12 year old child named Tamir Rice was deliberately shot on sight, without warning, while playing in a park by the police. And nothing happened. His mom got some money because that’s all anyone cares to give her. The local cops ridicule her, sometimes openly. They knowingly lied about her son and what happened. They did not provide immediate first aid for Tamir’s wounds. They made his sister watch her 12 year brother dying on the ground while locked in the back of a squad car, after a full grown man tackled her to stop her from reaching him. They didn’t even follow their own rules. The local DA was forced by protests to convene a grand jury which he threw so flagrantly and deliberately that details of the proceedings were leaked to the public – something which simply does not happen with grand juries. Grand juries do not leak. From front to back, this case is as egregiously unjust and cruel as it is possible to be.

And, by all appearances, a lot of Americans are cool with that. They’ll repeat easily disproven lies smearing a 12 year old child before dealing with the obvious problem Kapernick and other athletes are protesting. To them, the most important thing is that we all agree that there is most certainly not a problem and further, that we are not allowed to talk openly about the problem outside of a few well-worn bromides that have always sufficed before. Unfortunately, there are people with really loud voices and a lot of power who fall into the category of people who just don’t give a shit about a 12 year old kid in a supposed “ghetto” that they won’t even drive through but know everything about. Where a 12 year old child was playing when he was shot by the police, no wilding gang members being available to do the job, apparently. The people who think like this are assholes. These are the people who need to be identified and kept away from positions of power and influence. Because they are literally sociopaths who are a danger to the rest of us.

So here’s what’s happening right now; as I warned y’all a couple of years back we’re going to be having a little test. And apparently God put Kapernick in charge of administering this part of it. The particular question we need to answer for this part of the test is simple:

What is more important to you: living in a country where it’s unthinkable for a 12 year old kid to be shot by a police officer while playing at the park or following protocol for interacting with national symbols?

That’s all you have to answer: which one matters more? A human being or the flag? Justice or a song? Will you kneel for justice and real human lives or will you refuse to on account of mere symbols? That’s the choice you get to make. It’s an easy enough question to answer. Which is more important – humans or symbols and protocols. Sociopaths will make one choice. Decent human beings will make another. So make your choice. What matters more to you? At the end of the day, what sort of person do you turn out to be? Choose. Let us all know. We’re watching.

One thought on “This Is Today’s Test”