As [Jesus] was setting out on a journey, a man ran up to Him and knelt before Him, and asked Him, “Good Teacher, what shall I do to inherit eternal life?” And Jesus said to him, “Why do you call Me good? No one is good except God alone. “You know the commandments, ‘DO NOT MURDER, DO NOT COMMIT ADULTERY, DO NOT STEAL, DO NOT BEAR FALSE WITNESS, Do not defraud, HONOR YOUR FATHER AND MOTHER.’” And he said to Him, “Teacher, I have kept all these things from my youth up.” Looking at him, Jesus felt a love for him and said to him, “One thing you lack: go and sell all you possess and give to the poor, and you will have treasure in heaven; and come, follow Me.” But at these words he was saddened, and he went away grieving, for he was one who owned much property.

I remember years ago hearing someone say that morals are for rich people. Which I didn’t understand. I mean, I can understand how a lack of money could drive you to stealing or fraud. But otherwise, why would morals be optional for people just because they didn’t have money? You don’t need money to be a good person, after all.

I, of course, still don’t think that poor people don’t have morals and that morals are for people with money. But what I have come to understand two things. First, that having good morals does not make you a good person. I know plenty of people who never break any of the 10 commandments and are terrible people. The second thing I’ve learned is that it takes much more to hang onto morality when you are already depleted by a ridiculously stressful life.

When there’s no comfort or pleasure in your life, it’s much harder to turn away from the comfort found in the arms of someone you are not in a covenant relationship with. When your mother and father were so desperate and depleted by the time that they came home, that they lashed out at you, it’s much harder to honor them than it is when you have a mom who greets you after school with a plate of cookies and a smile and a dad who wants to play catch in the yard after work while you tell him about your day. When a shady mortgage broker has defrauded you and you’ve lost your home and are living out of a cheap motel room, it’s much harder to convince yourself to stick to the rules just on principle. Life’s just different when you’re just struggling to survive.

While we may admire the upstanding, morally sound, financially comfortable person, the truth is that many of those people wouldn’t have held up any better under trying circumstances than anyone else. Which is part of why we can’t judge people. Only God knows the heart. And sometimes even a good heart gets overwhelmed, depleted and despairs. Which isn’t an excuse for immorality, but it is an explanation. God knows this.

The thing is that while we see morality as something that is just expected of us, it was given as something to struggle with. We’re actually meant to fail at it. In Romans, Paul says, “through the law we become conscious of our sin.” If we can follow the law, without fail, then the law is not having the effect God intends it to have in our lives.

Now, does this mean that God has set us up for failure so that he can then show up and play the super-hero who graciously saves us? I can certainly understand why someone would think that. However, this isn’t the case. In his letter to the Galatians, Paul explains about the law, “therefore the Law has become our tutor to lead us to Christ, so that we may be justified by faith.”

As Brene Brown says, “we are wired for struggle.” The law was meant to cause us to struggle. It is in struggling that we learn, grow and change. Struggle is like weightlifting for the soul. It tears us down and builds up back up, shaping us in the process. By placing demands on us that we will struggle and fail to meet, the law becomes our teacher, showing us the way towards Christ. 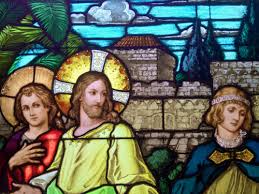 Now, consider what Jesus does in his interaction with the young rich man. When the young man approaches, Jesus starts by disarming him. “Only God is good.” If the point of the law is to follow it, then those who are good at following it are completely justified in thinking that they are themselves good. But if only God is good and even Jesus refuses to accept that descriptor, then this young man knows he cannot stand on his own goodness. We are not good because of our morality, but any goodness we have comes from our connection with the one who is good – God alone.

Jesus then brings up the commandments in order to draw out the young man’s relationship with them. When the young man responds that he has kept to them from his youth, we see the problem; he’s never struggled. Sure, he may have faced temptation. But he’s never had to struggle with the law to the point of failure. Which means that the law has not had the intended effect in his life.

The story says that Jesus looked at this young man who has sought righteousness the only way he knew how and loved him. Jesus loves us all, of course. But he looked at this young man in particular and saw something in him that he loved in that moment. I suspect that what he saw was a young man who had done all of the right things and yet knew somehow that it was inadequate. Something in him knew that he needed more than to keep to the commandments in order to attain what he sought.

He could have gone to the Pharisees and asked them what he needed to do and explained that he kept to the commandments and always had. They would have been happy to tell him that he was right with God, especially in light of the financial support his family provided to the religious establishment. But he didn’t. For whatever reason, he sought Jesus. Which, oddly enough, is exactly what the law is supposed to do – lead us to Jesus.

So Jesus looked at this young man and loved him for whatever was in him that knew he was lacking. And he says, “sell all you own and give it away.”

Jesus knows perfectly well that he’s asking this young man to do something he cannot do. It wasn’t just love of money, comfort and security that made it impossible for this young man to do as Jesus instructs. It would have been terribly destructive and irresponsible for him to sell everything and give it away. It would have meant casting his entire family into the streets, for one thing.

Jesus had other followers who were wealthy. He never asks any of them to sell everything to follow him. But he loved this young man and so gave to him what the law could not – something to struggle with.

3 thoughts on “Jesus’ Gift to a Young Rich Man”