If you are an American Christian, odds are really, really good that at some point you have been told that as you read scripture, you should try inserting your name for the word “you” in parts of scripture where Israel or God’s people are being addressed. So, I could read, “Rebecca shall be a crown of beauty in the hand of the LORD, and a royal diadem in the hand of her God. No longer will they call Rebecca Deserted, or name her land Desolate. But Rebecca will be called Hephzibah, and her land Beulah; for the LORD will take delight in Rebecca, and her land will be married.” (Isaiah 62:4) It’s not a terrible idea; sometimes we do need help personalizing scriptures and realizing that the love expressed applies to ourselves. Of course, if you do this, eventually you will end up with something like “Rebecca also took her beautiful jewels made of My gold and of My silver, which I had given her, and made for herself male images that she might play the harlot with them.” (Ezekial 16:17) Which is a little too personal maybe.

Now, if your pastors/teachers are any good at all, they have probably also taught you that in nearly all of the places where God speaks to “you” or even where Paul and Jesus address “you”, unless a specific person is being addressed, the word used indicates a plural you. So it’s more of a “y’all” than “you, Rebecca, sitting over there eating jelly beans.” This ought to be obvious as usually the word “you” is being used to address the nation of Israel or an entire church or the group of people being spoken to. But we Americans are notoriously hyper-individualistic. So with or without a anyone’s encouragement, we do tend to read scripture as if it were speaking to us individuals rather than to a collective group.

A while back, I became convicted that the hyper-individualistic programming of our culture isn’t compatible with Christianity. I matter as an individual, but I am also part of a larger body. My life is not for me alone, but for the good of God’s Kingdom – a Kingdom which encompasses all of creation. If I see my life and my faith as primarily about me, I am very much mistaken.

What I came to realize is that countering hyper-individualism isn’t just a matter of prioritizing social justice or even church fellowship. Rather hyper-individualism hides very deep truths about our identities, our purpose and even the meaning of our lives from us. Because the truth is that my life isn’t about “me”. My life and your life and the life of every other human on the planet is about “we”.

Now, that might sound like some new-agey, mumbo-jumbo, but it’s actually very deeply embedded in scripture. Go back to the very beginning. God made “adam”. That’s adam with a lowercase “a”. It means “man” as in “mankind”. God didn’t make A man. He made humanity. And he called humanity Adam. (The word “adam” is actually used several hundred times in the Old Testament. It really does mean mankind/men/people!) When God was dealing with Adam, he was dealing with humanity.

Ages ago, my husband pointed out to me that with few exceptions, God judges nations – peoples – rather than individuals. I found this idea offensive, frankly. I should be judged on my own merits, not on what the people around me are doing! But the reality is that a culture and a society are made up of the individuals in it. Unless, I am like Abram and have followed God’s lead to come out from among a sinful people, I am part of the society I live in and will be judged as it is judged. Look at the story of Sodom. God agrees that if there are even 10 righteous men in the city, he will not destroy it. In the end, the city is destroyed because it was beholden to a culture of violence, depravity and inhospitality. Lot clearly is not an innocent (he offers up his virgin daughter’s to a mob, after all!). But he does at least stand up to the forces of the culture around him and for that God allows him and his family to escape destruction. We are responsible not just for personal morality, but for how we handle ourselves in relation to the culture around us.

Shortly before his death, Jesus prayed over his followers and over us – his followers yet to come. In that prayer Jesus prays repeatedly that we would be one as he and the father are one. We often read this as being about church unity. But it goes much deeper than that. Trinitarian theology teaches that God is both one and three. Over the centuries, a great deal of time, hot air and ink has been spent trying to parse out what that means. But what we know is that in some way God, Jesus and the Holy Spirit are all one being, despite being three persons – for lack of a better word. When Jesus prays that we will be one as he and the father are one, this is the sense in which he is praying. That we would be both “I” and “we”. Both me, Rebecca and we, humanity, of which Rebecca is one individual. (Of course, theologically speaking, Jesus, God and the Holy Spirit are all of one substance which has its own implications for us – am I of one substance with you and just don’t know it? Many spiritual teachers have claimed just that. Our scriptures are largely silent on this.)

Or let’s consider it another way. Each of us has the same identity. Each human being was created in the image of God. It is, at the root, who we are. There’s an ancient rabbinical saying which Jesus would have known as well that says, “When Caesar puts his image on a coin, all the coins come out identical. When that One who is beyond rulers puts the Divine Image on a ‘coin,’ all the ‘coins’ come out unique.” Yet for all of our differences, we all have the same identity as image bearers. I recently read somewhere else that every person I meet is another version of me. That’s how deeply we are connected. And that’s what we are missing when we are working out of a hyper-individualistic mindset.

As I started understanding these realities, I rather purposefully shifted my language to reflect the reality that I am not simply “me”, but am part of a larger “we”. It was an illuminating shift. I found that when I’m thinking in terms of “me” rather than “we”, it’s hard to see the forest for the trees. But once I started using we language, I could see that the news was about the way we humans were behaving towards each other rather than about discrete events. Movies are the stories we tell ourselves about who we are or were or could be or wish we were or might have been. Our laws and policies are about the way we organize ourselves, set our priorities and treat each other. If I don’t like the way we are behaving, well, that’s an awful lot like when I don’t like the way I am behaving. If I don’t like the way I am behaving, I need to figure out why I’m doing things I know I shouldn’t be doing and set about fixing and unlearning and relearning. I don’t start a war with myself or engage in daily arguments with myself over it. I figure out what the problem is and make real, practically changes to address them. It works the same when we aren’t behaving the way we should.

According to the Presbyterian Church’s Book of Order, when a person is baptized, the congregation answers this question: ‘Do you, the members of this congregation, in the name of the whole Church of Christ, undertake the responsibility for the continued Christian nurture of this person, promising to be an example of the new life in Christ and to pray for him or her in this new life?’ We make this promise because we know that no adult belongs to himself or herself, and that no child belongs to his or her parents, but that every person is a child of God. Because of that, every young one is our child, the church’s child to care for. This is not an option. It is a responsibility. 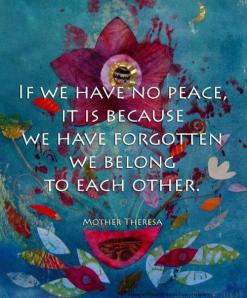 This is how it works – we belong to each other. This has always been true, but this moment in history is probably the first time we’ve been able to see the reality of it so clearly. If I eat chocolate, odds are very good that a child in slavery harvested the beans for it. Another version of me has the life they have because of seemingly innocuous things that I do. My engagement ring probably bought a gun that was used to kill someone. Someone made with the same image as me at their core. I am wearing clothing sewn by a woman in a sweat shop. A woman just like me, only in a different place. And if she were in my place, she’d be wearing a shirt made in a sweat shop too. It’s overwhelming, really to have to face the reality that we human beings can’t do anything without it affecting people a world away who we barely know exist. But if you take that reality and add to it the fact that we all belong to each other, hope appears. The idea that the $100 I was going to spend on a new lamp might actually have been meant for someone else is no longer so strange and incomprehensible. It starts to make sense to me that I was given that excess so I could make sure it got to someone who needs it. We really are all in this together.

One of the amazing things about learning to think in this way is that rather than my own personal identity disappearing, as those still caught in hyper-individualistic thinking fear is the case, I actually matter more. Who I am is part of a larger whole. If I want the larger whole to be better, then I have to be better. That’s the part that I control. It’s my little piece of the puzzle to work on. And the healthier and more whole I am, the more I am able to tend to others. And as I tend to others, I run into those parts of me which are still broken or immature or neglected. The parts of me which are selfish or prone to dysfunction or scared. And as those are uncovered, I can bring them to God for restoration. Instead of becoming better because I’m supposed to or I want to, I am becoming better so that I can help humanity be better. As we all do it, the world starts to change.

Despite suffering from Parkinson’s disease, Muhammad Ali sometimes given speeches in support of his social advocacy work. At the start he will hold up one finger and say, “me.” Then he will hold up a fist and say, “we.” Power doesn’t come from the hyper-individualistic me. Power comes from “we”. We are all in this together. We are Adam – mankind. We do belong to each other. And it was Jesus’ fervent prayer that the we would be one as he and the father are one.