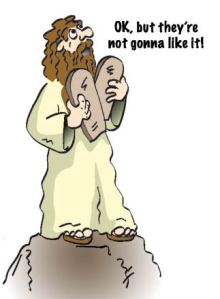 I have some argumentative children.  Quarrelsome, you could say.  Sometimes they will do something mind bogglingly absurd and then try to defend themselves by saying, “you never told me I couldn’t [paint the dog with gravy]/[microwave a stuffed animal]/[tell relatives how much I enjoy setting things on fire and seeing how long it takes for them to call you to express concern]/etc.”  To which my standard response is always, “I also never told you not to crap in the middle of the living room floor!  There are some things you shouldn’t have to tell people not to do!”  It’s crazy the things kids get in their heads to do sometimes.

Interestingly, God has faced these same sort of struggles with us, albeit with much more serious issues:

“They have built the high places of Baal to burn their sons in the fire as offerings to Baal – something I did not command or mention, nor did it enter my mind.”

Like particularly evil children, the Hebrews had managed to come up with a way to do something so ridiculous that it hadn’t even entered into the mind of God to tell them not to do it!  Now that takes some doing.

Looking through some of the old Levitical codes, you can almost imagine the exasperation that God must have experienced having to tell people, “no, you cannot have sex with animals. That’s gross.”

I can just imagine God trying to negotiate the pitfalls of handing a set of rules to Moses that the people could actually follow and that moved them as far away from barbarity and towards love as he could get them:

MOSES: So, who can people marry?

GOD: Well, you can’t marry a sibling or a parent, that’s for sure.

MOSES: How about your mother-in-law?

If we think that some of the old laws of the OT are bad, just think of what they were replacing!  No crapping in the living room, indeed!

2 thoughts on ““No Crapping in the Middle of the Living room!””