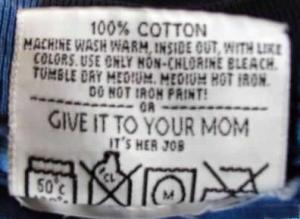 Want to drive yourself crazy?  Do what I do: have a set of kids, wait 5 or 6 years and have another set.  Try to figure out if you screwed up the first set so you can better parent the second set.  It’s a terrible pastime, really; going back and revisiting every parenting decision you made along the way to try to judge the outcomes.  I used to wonder how people who had obviously screwed their kids up felt about the whole mess.  Now I find myself wondering if I put myself into that category by not doing things the way everyone else usually does them.

I didn’t punish a lot.  I yelled, but always let the kids know that freaking out was a fault of mine and let them see me struggle with it.  I was more than willing to hold a firm line, but my end goal was always to gain agreement from my kids on the sort of people they should be trying to be.  I answered every “why” question I possibly could.  I spanked only to gain a kid’s attention, never as punishment and tried to refrain from it altogether.  I taught my values by explaining my opinion, giving a respectful explanation for the other side’s point of view and why I disagreed with it.  I would always remind them that one day they will have to choose what to believe for themselves.  I disciplined by correcting, explaining, listening, refusing to let things go when a kid persisted in a behavior that was a problem.  I tried to coach rather than criticize.

Doesn’t that sound nice?  I thought so.  But here’s the thing: my boys were really difficult.  True story: I was telling a friend once about the time Collin, my younger son, was 4 years old and locked me out of the house.  We were all outside and I was working in the yard.  Collin had asked for a popcicle and I said no.  A few minutes later, he wasn’t nearby, so I went to check and see what he was doing.  I went to the house and could see Collin sitting on the kitchen floor eating a popcicle.  And I discovered that he had locked the door behind him.  At this point in the story, my wide-eyed friend actually gasps.  “My kids know they would be in so much trouble if they did something like that!” She tells me.

I just had to laugh.  My kid knew they would get in trouble.  That’s why he locked the door – so he would have a chance to eat as much of the popcicle as he could before I got to him.  “That’s the difference between you kids and mine,” I explained to my friend, “your kids would actually care about getting in trouble.  Mine are just incredulous and offended that I have the temerity to stop them from doing whatever they want.”  My husband always blamed the boy’s obnoxiousness on them not being afraid of us.  Having kids who were afraid of the parents always sounded like a bad idea to me.  I dunno.  Maybe I was wrong.

I recently asked my oldest (now 16) for an explanation of why he was so difficult as a kid.  He told me that it was the “why?” question that drove a lot of it.  If it didn’t make sense to him, then he didn’t see why he should do it.  If I got really worked up he would decide that he should comply just to humor me.  So, pretty much my worst critic’s view of what was going on was true.

But then he went on.  He told me that he knows it was a lot more work to do things the way I did – by seeking compliance and answering every genuine “why” question I reasonably could.  And by coaching and coaxing rather than criticizing and punishing.  But he says he now credits that with being the reason he feels really prepared to meet the challenges that have and will come his way.  He says that when I would give him answers to his “why” questions, I was showing him how to think about and approach things.  In time he saw that I was right more than wrong and began to adopt more of my thought process for himself.  Some things I tried to impress on him (like the importance of cleaning up all the time), he still isn’t buying into.  And he will never be as emotional as I am.  And he’s still got a lot of growing up to do, but he said that even from his limited vantage point as a 16 year old, he found the way of thinking about things I had modeled to be very useful when he found himself dealing with people and situations which were foreign to him.  He said that he tested the things I had taught him against what he saw going on around him and found my guidance to be reliable.  He says my way was worth it.  Then again, he wasn’t on the receiving end of his non-compliance for all those years!

Interestingly, he also tells me that there was an important role for the physical punishments we -particularly my husband – would sometimes impose when no other threats, punishments or corrections would work.  Sitting on the wall or holding their arms out for long enough to get very uncomfortable were regular events for a period of time during the late elementary and early middle school years.  I always felt bad about this because in an ideal parenting worlnd, a parent would not have to inflict suffering on their own child just to get them to co-operate with simple instructions.  And my son confirmed what I had long suspected: that he was rarely deterred much by the threat of punishment.  He said that it wasn’t that he didn’t think he would get in trouble – he was usually quite certain he would.  He said that in the middle of things, he didn’t care that he was going to get in trouble.  But he does credit these physical disciplines for helping him learn to control himself.  First he had to learn to control his own body in order to comply and not have time added on.  He was always a kid who seemed to be careening through the world with no great awareness of what he was doing, so this was important to him.  He says it also taught him to control his emotions.  My kids have always been highly dramatic in their emotional outbursts (no idea where they’d get that from!  lol).  But while sitting on the wall, he started to realize how pointless all the yelling and wailing was, how it just made him feel worse and didn’t win him any points with us either.  He said that up until then, he was always so caught up in his outbursts that he never really thought to try and stop himself.  I would still love to be able to say that I had raised my kids without deliberately inflicting suffering on them, but this was a kid who needed the lesson of self-control more than almost any kid I’ve ever known, so I’m glad he learned it at all.

Thankfully, my girls so far are soooo much easier than my boys were.  Which unfortunately makes me even more paranoid sometimes: what if I did something wrong that made my boys so much more difficult to begin with? Did I do too much for them?  Did I pay too much attention to them?  Am I now rationalizing to justify for my inability to spend as much time following my 1 year old around as I did with my boys?  I am all powerful queen of the universe, after all.  Everything must somehow have its source in me – right?  And really, that mindset right there is the real recipe for a mom looking to drive herself crazy!  I probably ought to stop!