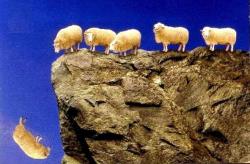 Let me tell you a few things about the Christian book/music/entertainment industry:

1. It works just like the rest of the publishing/music/entertainment industry.

2. It is a system which grants power, money and influence to a very few while the majority of people God has gifted struggle to get anyone to even LOOK at the fruits of their gifts.

As I wrote about a couple of weeks ago, I have been working to put together events that are built on an idea/conviction I had to offer a new, better, more Godly model for conducting business.  Over the last couple of weeks, I have been reaching out to churches and charities to work with on this.  Part of what I have been trying to do is expand my idea to include others who have things they have written, recorded or otherwise created.  This is because I know that there are so many others who have poured their hearts and love of God and His people into their work and have no audience for it.  Also, I really do think the church should be leading the charge to find better ways of doing things than what the rest of the world is doing.

I’m sorry to report that my experiences have not put church leadership in a good light.  Most church leaders I have approached pretty much ignored what I had to say and assumed that I was just trying to gain access to their community in order to promote myself.  Without so much as looking at a single page of the book before handing it back to me, I was ignored or dismissed.  A couple, including the pastor of the local large, hyper-conservative evangelical church in town were at least willing to listen and look long enough to see that I’m not a hack and I am being sincere.  However, even those who listened and liked what I was saying and proposing to do stopped short of being willing to participate because they are afraid of seeming to endorse something other than what comes out of Zondervan or Varsity Press.  I even tried explaining that my particular book wasn’t the point and I would be happy to help arrange something without using my book.  But several pastors told me that they have all sorts of writers and artists running around their churches who would like the congregation’s support and in order to preserve peace (“Do not think that I came to bring peace” said Jesus), they say no to everyone.  It’s disgusting, quite frankly.

I could probably write a book on the problems with the response I have seen from the church, but I’ll just point out two:

1. God’s 2 most potent testimonies are the bible which is filled with poetry, music, stories and such and His amazingly beautiful creation.  The bible says that God created the world with words – The Word, in fact.  Poetry, music, stories, proverbs and essays are near and dear to God’s heart*.  And the beauty of creation is a testimony to the vital and special place in the heart of God for art.  Yet determinedly refuses to support, nurture and embrace those who God has gifted as poets, writers, musicians and artists.  Some do better than others, but almost no churches will just sell the work of those creative people God has put into their midst so that they can support themselves through their work or just get the fruits of their creative activity into the hands of the rest of the church.  We are all part of the body of Christ and have been given roles to play – as long as you aren’t creative.  Then you’re like leg hair or something.  At best a church will provide a corner for people gifted in these ways to go sit in together.  Meanwhile, the music sung and the books that the pastors read and the materials used by small groups all come nicely pre-screened and pre-packaged by the corporate entities that God’s people allow to control what gets seen or heard by good proper Christian people.  It’s sick and disgusting and a complete abuse of the gifts and talents that God has so graciously planted in pretty much every church.  The fact that churches actually think it’s perfectly OK to refuse to do anything that could appear to be support for or promotion of those gifted in creative work is nothing less than spitting in the face of God and at the work of the Holy Spirit.

2. This wretched treatment of God’s creative people is driven almost entirely by fear.  Which is just about as un-biblical a reason as exists.  Over and over and over and over God tells us not to be afraid.  Every time an angel appears, the first thing out of their mouth is “don’t be afraid”.  Jesus spoke about not being afraid more than he talked about heaven.  The bible says that perfect love casts out fear.  And yet the church and its sheeple leaders are nothing if not afraid.  They are afraid to support people following God with their creative talents because they don’t want to be seen as “endorsing” something that might *gasp* be different from what everyone already thinks.  As if God needs our protection from those who slip into error at times in their work (which is a good description of all of us, not just those who write or sing or create)!  But more often than not, our churches are lead by and run by sheeple who have heard their shepherd’s voice, but are still fearful, stupid, unthinking animals rather than mature, courageous, wise friends of God.

Sadly, the places where I am getting a good response to my book are at local bookstores and coffee shops.  There the owners have taken the time to read the book and are more than happy to promote my work and arrange events.  Like always, the organized church is so consumed with keeping anything that might conceivably be a threat out that it’s easier to get the secular world to give an ear to what is good than it is to get so much as a hearing in the church.

Now, I write a lot about religion here, but I tend not to get too much into my own spiritual experiences.  However, I’m going to share something here which will probably convince those of you on the fence that I’m crazy.  At this point, I don’t even care.  Over the winter, I had virtually the same vivid dream 3 nights in a row.  I won’t go into all the details, but the core of the dream was that I was shopping with my husband for a house.  In my dream, I had some sort of leadership role and was looking for a home to use as shelter and protection for both myself and the people who I was charged with leading.  (This was a particularly tricky assignment because the world was breaking down into chaos and there was a totalitarian something in place that watched everything carefully.)  In my dream, I was being taken to houses with for sale signs out front by a realtor.  The houses I visited had large gardens out back which was important to me because I love to garden.  However, as I looked around the garden, I was puzzled to discover that they were filled with strange plants that I found unattractive and that I didn’t recognize (I have a pretty encyclopedic knowledge of plants used in gardens, so this was very weird).  I also discovered that each house had a cavernous underground area filled with people.  These people did not go to the surface, but were happily living their whole lives underground.  I was pleased to discover that there were so many people in these underground areas because these were the people I was trying to reach with the provisions I had been given.  At one point, I had even found a couple of orphaned children on the streets on the surface and was able to place them with families living underground who were eager to take care of them.

Because this dream was so vivid and repeated 3 nights in a row, I shared it with a few people.  One of them is a man who has had the ability to understand spiritual things deeply since childhood.  (As a child, he was known in the churches he attended as “the prophet”.  To this day every time he walks into a church, someone there refers to him as “pastor” despite the fact that he is not a pastor and would be completely unfit to be a pastor.  In addition, I have found his understanding to be very reliable many times in the past.)   This man took time over the course of a couple of months to meditate and pray over these dreams.  This is what he told me he was lead to see them as meaning:

The houses are churches.  They have for sale signs out from because the church is for sale.  Either through the pursuit of money or by working by the same rules that the rest of the money-hungry world works.  I was going to the churches to teach and correct errors which have warped the church.  The gardens are the leaders and the people that the church grows.  They were unknown and unattractive to me because they were not the sort of plants/people that God creates and grows, but were the sort of plants/people that the church is creating.  The caverns and people underground were the majority of people who are being kept in the dark by the church above them.  Although they are being kept underground, these are God’s people.  This is why these people were the ones to take orphaned children in and who were hungry for the provisions (teachings) I had obtained for them.

Like I said, this may be the post that puts me firmly in the crazy camp, but I have been following God for a long, long time and done many crazy things in order to follow Him where He has sent me.  What I share above is the complete truth of what I dreamt and the interpretation that was given to me by this man.  Take it or leave it or don’t care about it at all as you see fit.  But the more I am interacting with churches and their leaders, the more I am inclined to give the dream and interpretation credence.  So, make of it what you will.  But I really do believe that Jesus changed the world radically, but the people who claim to lead God’s people are  almost as dull and visionless as ever.  Or at least that’s my opinion at the moment!

*Did you know that many of Jesus’ parables were poems?  Kenneth Bailey who is an expert in middle eastern culture and Hebrew poetry, explains how the poetic form of the stories is worked into the meaning of the parables Jesus told in his book The Peasant and the Poet.  I have a degree in literature and write poetry myself and I was astounded at the complexity and sophistication of these poems that Jesus created.  In my semi-expert opinion, these are poems that rival the best poetry humans have ever written.  Jesus was no amateur!

5 thoughts on “The Sheeple are Leading the Flock!”